By separately comparing each of the blue variables to the density of Esperanto speakers, we get that most variables are significantly correlated.

The plot shows that, on average, countries with low language diversity has a higher density of Esperanto speakers, that countries where the population speaks languages similar to Esperanto have more Esperanto speakers and so on. All of these are just correlations – what are the causal effects? What if the real cause is just belonging to the Western World? Living in the Western World is correlated with low language diversity, good health care, a lot of internet etc. That could explain our observed correlations.

One way of getting closer to finding the real causation is to include many variables in the analysis. The strong relationship between the real causation and the variable of interest can make the non-causal correlations disappear. The results of that is shown in the plot below

In the following I will go through each variable and the conclusions.

Percentage of population on the internet

An internet user is defined as someone who has used the internet in the past 3 months. The data is downloaded from the World Bank. This variable is just significant for the number of Esperanto speakers.

GDP is the value of all products and services produced in a country. The data is downloaded from the World Bank. This variable is just non-significant for the number of Esperanto speakers.

The Good Country Index is a collection of 7 measures of how different countries contribute to the world in different areas. It is intended to challenge the importance GDP when countries make decisions.

The variable continent was added to the analysis to adjust for history.

I compared the predicted density of Esperanto speakers with the ‘actual’ density.

. This number is then multiplied with the multipliers from all the other factors,

The significant factors, internet, GDP, continent, science and culture, all contribute with high numbers to the expected number of Esperanto speakers for Great Britain.

The model is a linear regression

, are listed in the beginning of the blog post and

is the per capita number of Esperanto speakers. 37 Countries with missing data were removed from the analysis. I did not impute missing data because it changed the results drastically. The amount of multicollinearity is insignificant because the GVIF*(1/2*df) is in the range 1.1-2.5. The

value is 0.7166, so there is still a good amount of variance left in the data as seen from the residuals. The code and most of the data can be found in my gist repository. 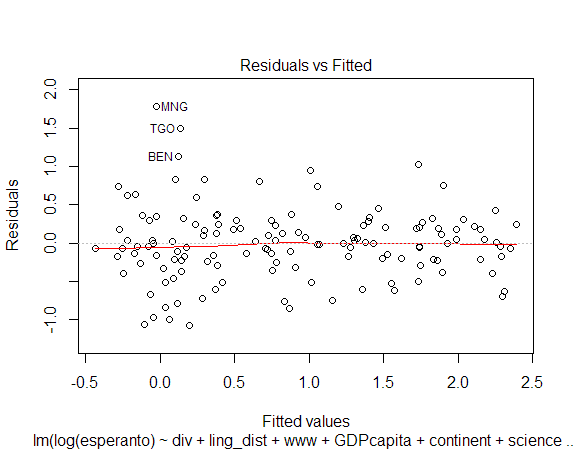